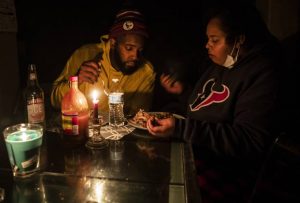 As tragic as this toll is, we now know Texas came 277 seconds away from a disaster orders of magnitude worse. On the early morning of Feb. 15, temperatures plunged to -2 F at Dallas-Fort Worth Airport and electric demand on the ERCOT grid hit an all-time high of 69,150 megawatts. ERCOT reports that at 1:14 a.m., as power generators failed and dropped offline, grid operating frequency dipped perilously below its required 60 Hertz. For five harrowing minutes officials scrambled to restore frequency with rolling blackouts. If the frequency dip had lasted another four minutes and 37 seconds grid function would have collapsed utterly, plunging 9 million Texans into a blackout of weeks if not months. (Pictured to the right: Howard and Nena Mamu eat dinner at their home in the Glenwood neighborhood in Hutto, Texas, Tuesday, Feb 16, 2021. (Ricardo B. Brazziell/Austin American-Statesman via AP))